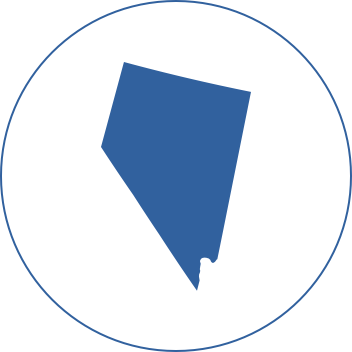 Online poker is legal in Nevada and so are other forms of gambling as Las Vegas is the gambling capital of the world.

When Nevada was first founded, it consisted of a series of mining towns wherein gabling was prevalent. When Nevada became a state in 1864, its first legislature tried to legalize gambling but were not successful. Throughout the late 1800s, a number of politicians tried to take a stand against games of chance, but all failed. But in 1909, Nevada did follow other states in an anti-gambling trend and outlawed all gambling. While some social games and small-change machines prevailed, most gambling establishments were shut down temporarily.

The trend reversed in 1919 when card rooms became legal and licensed. Both legal and illegal games became abundant again in Reno, and all of the changes led to a 1931 bill that legalized nearly all card games and betting. Licenses began to be issued to card rooms, bingo clubs, and small casinos, both in Las Vegas and in Reno. More people came to Las Vegas to build casinos, which increased in size and scope through the 1900s to include more games, hotel accommodations, and restaurants.

Online poker became legal in Nevada in 2013, and the state soon after partnered with Delaware to share online poker player pools to increase liquidity. In 2017, Nevada also partnered with New Jersey, with a shared player base to launch sometime in 2018.

Nearly every type of gambling is legal in Nevada, including sports betting. Native American casinos are also permitted in the state, but only a handful of tribes have entered into compacts to offer gambling on their reservations. It seems that only the Fort Mojave Indian Tribe and Moapa Band of Paiutes run gambling establishments under compacts with the state.

The timeline of legal and regulated online poker in Nevada thus far is as follows:

The 2014 online poker compact mentioned above was signed by Nevada Governor Brian Sandoval and Delaware Governor Jack Markell. The intention of the Multi-State Poker Network agreement was to create more revenue for both states, as players could compete on the same poker network, creating larger cash games and tournaments and, thus, drawing more players to the sites.

The shared poker network officially launched on March 25, 2015. The 888poker platform and WSOP operator were used, as both were the only options available in both states.

More than three years later, in October 2017, Nevada and Delaware signed a new agreement with New Jersey. Governor Sandoval represented New Jersey at the signing, alongside Delaware Governor John Carney and New Jersey Governor Chris Christie. The compact was set up to launch online poker with a tri-state-combined player pool, which will initially take place with 888poker and WSOP again, as it is the only internet poker operator/platform combination offered in all three states. The network is expected to go live sometime in 2018.

The three-state partnership will also include online casino progressive jackpots. This has not yet been done in the US market because Nevada has yet to include online slots in its legal interactive gaming framework. However, New Jersey and Delaware will eventually coordinate their sites – also via WSOP and 888poker – to share progressives and enable larger winnings.

Since Pennsylvania also legalized online poker in 2017, it is expected that its games will launch in 2018. At some point in 2018 or 2019, Nevada, Delaware, and New Jersey are expected to discuss expanding the multi-state poker sharing agreement to include Pennsylvania, when the latter is prepared to do so.

Nevada legislators have yet to undertake serious discussions regarding any expansion of its internet gaming regulations. With only one site operational in the state, the market is not nearly as lucrative as many analysts predicted it could be. However, there are no indications that legislators are ready to open the market to offer licenses to sites currently excluded by the suitability clause or to allow online casino games to operate for real money. Only free-play sites exist for some casinos as of the beginning of 2018.

Assembly Bill 114 was the bill that allowed Nevada to become the first state to legalize online poker in the United States. The state legislature passed the law on February 21, 2013, after which Governor Brian Sandoval signed it into law.

Title 41 of the Nevada Statutes addresses gaming, horse racing, and sporting events. Chapter 463 of that title details all laws surrounding the licensing and control of gaming.

According to the statute, interactive gaming is defined as

“the conduct of gambling games through the use of communications technology that allows a person, utilizing money, checks, electronic checks, electronic transfers of money, credit cards, debit cards or any other instrumentality, to transmit to a computer information to assist in the placing of a bet or wager and corresponding information related to the display of the game, game outcomes or other similar information. The term includes, without limitation, internet poker.”

It goes on to state that it does not include operating a race book or sports pool.

In that definition, communications technology is defined as

Interactive gaming facility is defined as

“any internet website, or similar communications facility in which transmissions may cross any state’s boundaries, through which any person operates interactive gaming through the use of communications technology.”

Section 747 describes the governor’s authorization to enter into agreements with other governments for interactive gaming. For online poker, this means shared liquidity that allows operators in multiple states to combine their player pools for larger fields in cash games and tournaments. Requirements for this to happen include:

The law goes on to detail the licensing requirements for operators, manufactures, affiliates, and service providers. There are various requirements for restricted and non-restricted licenses for resort hotels and gaming establishments, all within the state of Nevada.

The suitability clause, which pertains to companies that operated in the United States after the Unlawful Internet Gaming Act of 2006 was enacted (December 31, 2006), is complicated. Some operators may be found suitable for an interactive gaming license in Nevada within five years of February 21, 2013, but they must submit to the jurisdiction of the US and each state in which they operated and waive any statutes of limitation or other prosecution preclusions. The Nevada Gaming Commission may allow a hearing for those that wish to plead a case.

How Much Does A License Cost in Nevada?

The initial licensing fee for manufacturers is set at $125,000, and renewals are $25,000 for one-year time periods. The initial fee for establishments is $500,000, and three companies paid that amount – Ultimate Gaming (Station Casinos), Real Gaming (South Point), and World Series of Poker (Caesars). Ultimate Gaming eventually stopped all operations, however, and Real Gaming never garnered enough traffic to become a viable online poker site. WSOP is the only operator still standing and continues to operate. These licenses can be renewed for one-year periods for $250,000. These fees can be raised to $1 million for initial licenses and $500,000 for renewals if the Commission and Board decide it is necessary. They can also be reduced to $150,000 and $75,000, respectively.

Pursuant to the Nevada Gaming Control Act, the Gaming Control Board and Gaming Commission devised a framework per the law for interactive gaming, which is posted on their official website.

As of 2018, online gaming operators are not allowed to accept wagers on any game except poker and its derivatives, all of which have been approved by the Board.

Disclaimer: This is not written by an attorney and is not or should not be construed as legal advice. Please consult an attorney for help interpreting these laws as they pertain to any given situation.

Question:  Can I play on poker sites besides WSOP.com?

Answer:  Online poker is legal in Nevada, but only as it pertains to WSOP.com as a licensed and regulated site. There is no indication that any other companies are preparing to apply for licenses, and sites like PokerStars are not eligible to apply. Other sites, some that we recommend for US players, do include Nevada players and allow them to create accounts and play online poker. Sites like BetOnline and Intertops do provide alternatives for players in a restricted state like Nevada.

Question:  Will WSOP ban me if I play on non-Nevada sites as well?

Answer:  It is unlikely. WSOP site executives are not likely to monitor other sites for players, and Nevada law enforcement are not apt to do so, either. It is possible that Nevada gaming authorities will pursue legal action to keep unlicensed sites from doing business with Nevada residents, but if this happens, players will not be targeted, and sites will give players ample time to withdraw funds before leaving the state’s market.

Answer:  That is something only poker operators themselves can answer. It may be difficult to partner with casino operations in Nevada, but it is also not as lucrative to do so without also being able to offer online casino games. And with WSOP being the sole offering in the market for several years, any other site will have an uphill battle in order to be competitive. It is also unclear how much the market is worth because Nevada does not release revenue numbers for the online poker industry.