Nevada Poker Revenues in June Highest in Over a Decade 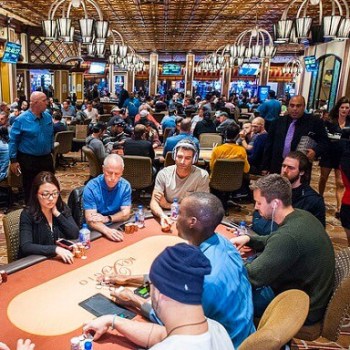 Over the past few years those people following the poker news have become accustomed to reading about the game’s contracting fortunes around the world, particularly in the online realm. Nevertheless, Nevada continues to shine a ray of sunshine on the industry, and in June the market saw its revenues grow by 4.8% year-on-year, meaning that it has now returned growth in twelve out of the past fourteen months.

The good news doesn’t end there, either, as the state’s poker market also very nearly succeeded in breaking an all-time record that has stood for almost eleven years.

Nevada boasts 60 poker rooms and 683 tables which generated a combined $17.48 million in cash game revenue last month, with that number also including the state’s online poker earnings. From that tally, the Las Vegas Strip with 18 poker rooms and 379 tables accounted for $14.1 million, or roughly 80% of all poker revenues produced in the state.

Not only was June’s result just the second time that the market has ever surpassed $17-million in revenue, but it also fell just short of the peak recorded in June 2007 of $17.66 million. Commenting upon the hugely positive news, Bill Rini, Head of Online Poker at WSOP.com, pointed towards this summer’s record breaking World Series of Poker as a major contributing factor to the market’s success, as well as the tri-state online poker sharing network launched in May. As he subsequently explained:

“Nevada performance has always been solid for WSOP.com and shared liquidity has pumped some additional excitement into the market. Obviously with the land-based WSOP going on since we launched it’s difficult to pinpoint specific cause and effect relationships, but there’s no doubt that this summer was great for online poker players both in Nevada and New Jersey. Record prize pools and record numbers of tournaments entries prove that with shared liquidity the whole is greater than the sum of the parts.”

While the WSOP traditionally provides a sizeable boost to Nevada’s poker revenues each summer, the 49th Annual World Series of Poker was one for the record books. Amongst the multiple records broken this year was the most number of participants at 123,865, representing a 2.3% increase compared to 2017. This year also had four more events than the previous year, including a record four online bracelet events, which helped boost the overall prize pool to $266,889,193, making it the largest in the WSOP’s five decade long history.

Attendance at the WSOP Main Event also helps provide a gauge as to the health of the overall poker market, and this year its organizers couldn’t have hoped for a much more impressive turnout. Not only did the flagship tournament draw its second largest field ever at 7,874 entries, but Day 1C goes down as the Main Event’s single largest starting flight with 4,571 players.

The Silver State was also uniquely placed to make the most of the WSOP after welcoming New Jersey to the Nevada/Delaware iPoker network in May. This meant that New Jersey players could compete for online bracelets from the comfort of their own homes for the very first time, and as it turned out it would have been difficult to have written a better scrip. After all, Matt Mendez became the first person playing from New Jersey to win an online bracelet after besting a 1,223 player field at the WSOP $565 Pot Limit Omaha 6 Handed – Online (Event #47) for $135,078.

In the past, the 28-year-old stay-at-home father used to spend time traveling around the country and playing in various live tournaments, but says that these days he gets homesick to quickly. In a heart-warming story, Mendez subsequently made its all the way to the final stages of the event, and as he later explained:

Fortunately for him it proved to be the former, with his victory also representing a triumph for NJ online poker. Nevertheless, the Caesars/WSOP and 888 partnership are currently the only brands benefiting from the shared player network as they are the sole operators with a presence in all three regulated states. That could all change, however, if Pennsylvania decides to join the shared network sometime next year.

Finally, Nevada’s overall casino market generated a combined $933 in revenues last month, up by 4.2% year-on-year, and stringing together five straight months of growth for the state’s gambling market. While slot machines saw their revenues drop by 1.2% to $593.1 million, table games, on the other hand, provided a lift after noting a 15% spike in revenue to $339.8 million.