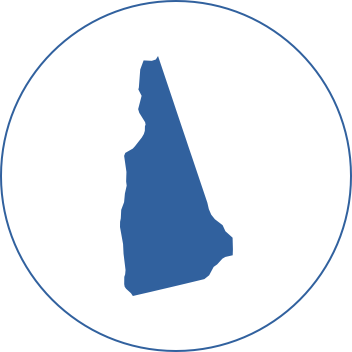 The State does not specifically outline in their laws whether online poker is legal in New Hampshire or illegal. New Hampshire legalized pari-mutuel wagering on horse racing in 1933 for thoroughbreds and harness races. That same year, Rockingham Park opened for that purpose. It wasn’t until 1973 that any other forms of race wagering were allowed, and it was greyhound racing that was legalized then. However, it was discontinued in 2010, just one year after horse racing ended in the state because of a lack of profitable tracks. There are, however, two pari-mutuel facilities remaining.

In 1949, legislators authorized bingo and a game called Lucky 7. Four years later, they began considering legalizing sweepstakes, and they eventually passed the bill in 1963. That allowed for the creation of the Sweepstakes Commission, and New Hampshire went down in history as the first state to offer the lottery as it’s known today.

Games of chance for charitable organizations were legalized in 1977, which joined bingo (beano) and Lucky 7 in the charitable gambling category. The manufacturing of gambling machines is legal in New Hampshire, but the playing of the games is not. In addition, gambling-enabled cruise ships are allowed to dock along the state’s shores for up to 48 hours, but all gambling machines must be disabled during that time.

New Hampshire began considering online poker and gaming at the beginning of 2017 with a House bill introduced by three Republican Representatives. Essentially, the bill was set up to exempt gambling over the internet from the statutes that list it as a gambling offense. There was a hearing in the House Ways and Means Committee about the bill, but the primary focus of the conversation was daily fantasy sports.

In June of 2017, both houses of the legislators passed a bill to put New Hampshire’s existing lottery online and sell tickets via the internet and mobile applications. Later in 2017, a daily fantasy sports passed as well, and the governor signed it into laws.

After the online lottery and DFS bills passed, the summer months of 2017 brought a reconsideration of HB.562, the aforementioned online gambling bill. A subcommittee work session was scheduled for early September, and when that failed to take place, it was brought up again for October consideration. The fact that the bill was devoid of regulatory framework details, such as tax and licensing rates, made it difficult to pass at the end of a session, however. Legislators in the committee voted down the bill for progress in 2017 and did so unanimously.

Meanwhile, New Hampshire State Senator has been pushing fellow legislators to consider land-based casinos for many years. The closest he came to passage of a bill was in 2014 when the Senate supported his legislation to authorize two casinos, but the House voted it down by one single vote. He continues to push for casinos, which could present an opportunity for online poker and casino games to be considered anew as well.

Since neighboring states like New Jersey, Pennsylvania, and Delaware have all legalized internet gambling, there is a high likelihood that New Hampshire will put forth another bill in 2018 or 2019 that will find the support necessary to move it forward.

Title LXII of the New Hampshire Statutes lays out the criminal code for the state, and Chapter 647 is for gambling offenses, directly between desecration of the flag and subversive activities. The first section addresses lotteries and the second gambling.

Gambling, by the statute’s definition, means

The section is not long or too complicated. It begins by stating that a person is guilty of a misdemeanor if he or she knowingly:

Crimes become more severe if the person permits gambling on the premises of a business or owns an entire gambling business with more than $2,000 in gross revenue per day or $5,000 in a 30-day period.

Poker games are addressed near the end of the section, as private games in a residence are legal as long as the house takes no compensation from the prize pool, no admission fee or seat fee is charged, and no one receives money or anything of value for hosting. In other words, there is no rake or entrance/tournament fee to be charged for a home game, the house cannot be the bank, there is no advertisement for the game in public, and the game must be capped at 10 players.

The New Hampshire Racing and Charitable Gaming Division’s website does not address internet gambling at any point, not even in the FAQ section. The Gaming Regulatory Oversight Authority, another offshoot of the state government, also refrains from mentioning internet poker or casino games on its site.

Disclaimer: This is not written by an attorney and is not or should not be construed as legal advice. Please consult an attorney for help interpreting these laws as they pertain to any given situation.

Question:  Can I play online poker from New Hampshire?

Answer:  Yes. There are a number of recommended poker sites that offer real-money gaming for players living in New Hampshire.

Answer:  This is very unlikely. New Hampshire players have been competing on sites like BetOnline and Bovada for years without incident. If the operators are penalized for their participation in the US market, the funds still belong to the players and will be distributed.

Question:  How can I encourage legislators to legalize online poker in New Hampshire?

Answer:  Any personal outreach to a legislator is helpful. By simply writing an email or sending a message via social media to your local lawmakers, it is easy to list the reasons that online poker should be legal. Organizations like the Poker Players Alliance can help with legislator contact information and help with writing notes to them.

Gaming Resources on the State of New Hampshire