Is Poker Legal In Hawaii? 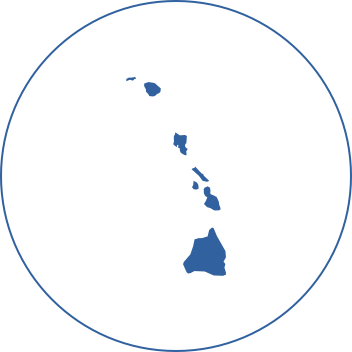 Hawaiian law does not declare online poker legal or illegal. There is no lottery or casino gambling allowed on the islands of Hawaii. The state law even prohibits gambling on ships off the coast of Hawaii.

Social gambling is permitted, but there are tight restrictions and cannot be associated with any bookmaking or lottery-type activities.

In a state with so little gambling permitted, it was interesting to see a legislator introduce an online poker bill. Needless to say, however, not much happened after that point.

The topic of online poker and casino games came up among legislators in 2011 after the Black Friday indictments of online poker company executives. The state briefly considered legalizing the activities to avoid any confusion with federal laws, but the issue was dropped as quickly as it came up.

In January 2012, there were a handful of legislators discussing online gambling due to the United States Department of Justice decision regarding the Wire Act that had just been revealed in November 2011. Some legislators wanted to respond to that newly-opened window by embracing online gaming, as well as instituting a lottery and consider land-based casinos.

After a few years of no bills due to a lack of support, State Senator Will Espero decided to try again in 2017. He introduced SB.677, again in response to the 2011 DOJ decision, to legalize online poker. The bill stated that “tens of thousands of Hawaii residents are estimated to participate in illegal online gambling on unregulated internet web sites.” The point of the bill was to show that legalization could protect those citizens who are not protected by state or federal law, in addition to the possibility of generating “tens of millions of dollars in revenues” from the games for Hawaii. The bill also provided for the creation of the “Hawaii Internet Lottery and Gaming Corporation” to regulate all forms of gambling on the islands.

Online poker was a big part of the bill, and interstate agreements were also specified to be authorized by the piece of legislation. There were also components of the bill to allow brick-and-mortar establishments to run twice-yearly gambling events and legalize some types of sweepstakes.

The bill died in 2017, however, due to a lack of support or interest in introducing any forms of gambling to the state. Hawaiians are proud of their long history of surviving on tourism and do not want to taint the state’s image by trying to attract gamblers.

Gambling falls under the Hawaii Penal Code, which is Title 37 under Division 5 of the Hawaiian Code. Under the section entitled “Offenses Against Public Health and Morals, gambling is listed after prostitution and obscenity, and just before drugs and intoxicating compounds.

The definition of gambling is listed as follows:

“A person engages in gambling if he stakes or risks something of value upon the outcome of a contest of chance or a future contingent event not under his control or influence, upon an agreement or understanding that he or someone else will receive something of value in the event of a certain outcome.”

Further, the advancement of gambling activity is defined as engaging

“in conduct that materially aids in any form of gambling activity. Conduct of this nature includes but is not limited to conduct directed toward the creation or establishment of the particular game, contest, scheme, device, or activity involved, toward the acquisition or maintenance of premises, paraphernalia, equipment, or apparatus therefor, toward the solicitation or inducement of persons to participate therein, toward the actual conduct of the playing phases thereof, toward the arrangement of any of its financial or recording phases, or toward any other phase of its operation.”

The code also erases any potential arguments for poker being a game of skill when it defines contests of chance as any game in which “the outcome depends in a material degree upon an element of chance, notwithstanding that skill of the contestants may also be a factor therein.”

Finally, a player is defined as “a person who engages in gambling solely as a contestant or bettor.”

The penalties for gambling include the following:

Social gambling was recently added to the Hawaiian Code, and it is permitted as long as players compete on equal terms, no player receives anything of value or profit other than winnings, players are of legal ages, and it is not done in a public place. Social gambling cannot include any type of bookmaking or lottery activities. Examples given in the statute include casual bets between golfers or bowlers.

As for online poker or casino games, they are not explicitly mentioned in the state law.

Disclaimer:  This is not written by an attorney and is not or should not be construed as legal advice. Please consult an attorney for help interpreting these laws as they pertain to any given situation.

Answer:  There are several sites that do allow poker players in Hawaii to register for online accounts and play. Sites like Bovada and Intertops cater to the islands, as there are no laws that specifically outlaw online poker.

Question:  Are internet connections good enough to play for long periods of time?

Answer:  Yes. Technology has allowed Hawaii to maintain the same type of solid internet connections that others in the US enjoy. Many online players compete from the Hawaiian islands and never have issues playing in tournaments or cash game sessions. If there are ever any connection problems, customer service representatives at any online poker site can award refunds or resolve other issues.

Question:  Why are there so few pro players from Hawaii?

Answer:  Gambling is generally not a part of the Hawaiian culture. Online poker became the exception for several years, especially during the poker boom, but most Hawaiians simply do not care to play games online or gamble.