Is Gambling / Poker Legal in Arizona? 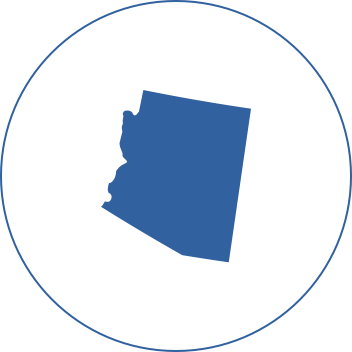 Yes, but mainly in Native American casinos. With the passage of the Indian Gaming Regulatory Act of 1986, Native Americans obtained the legal right to offer gambling on their reservations. It went into effect in 1993, but it took another decade for individual tribal compacts to be completed. Among the 21 tribes, there are a total of 25 casinos throughout the state, all with the option to offer everything from live poker and table games to slot machines and video poker, many even offering hotel and other accommodations.

Betting is allowed on horse and dog racing but only at the tracks, as no off-track wagering is permitted. There is a legal lottery, as well as bingo and charitable fundraisers using casino themes. Raffles are also legal, as is social gambling.

Legal poker may fall into the category of social gaming, but it is not specified.

Can I Play Online Poker in Arizona?

The poker laws of Arizona do not specifically address online poker as a legal or illegal form of gambling.

Some of Arizona’s gambling laws fall under Title 5, which is categorized for “Amusements and Sports.” Bingo, racing, lottery, and Indian reservation gambling all fall under that section of the state statutes.

Gambling in general, on the other hand, is addressed in Title 13, the “Criminal Code” portion of the statute. Chapter 33 of that section goes into gambling, and the first section defines “amusement gambling” as “involving a device, game or contest which is played for entertainment” if all of the following conditions apply:  Players actively participate in the game, the outcome is not in the control of any person other than the players, and prizes are not offered as “a lure to separate the player or players from their money.”

In addition, at least one of these must apply to be construed as gambling: Players do not benefit other than to replay, which is not exchangeable for value, no one other than players derive a profit from money paid by players in an athletic event, money paid to gamble is part of purchase price of product and no drawing is held to determine winners, or skill is the predominant factor in the game.

That final portion of the gambling definition is important to relay in full:

Legislators clearly wanted to separate games of skill and chance, though they chose a very confusingly wordy way to do it.

There are exclusions to the bill, however, in a section that details conduct that is “not unlawful”:

This is where the definition of social gambling comes in as “gambling that is not conducted as a business and that involves players who compete on equal terms with each other in a gamble if all of the following apply”: No player receives benefits other than winnings, no other person benefits from the gambling activity, no players are below 21 years old, and no player enjoys an advantage over another player via the game rules. Poker should apply under this statute, but it has never been tested in court.

Other key components of the statute include:

With that said, there has never been any indication that Arizona authorities cared to prosecute online poker sites, much less the players on those sites.

Disclaimer:  This is not written by an attorney and is not or should not be construed as legal advice. Please consult an attorney for help interpreting these laws as they pertain to any given situation.

Despite Arizona being a home to many poker players, as well as located near the card rooms of California and the gambling mecca of Las Vegas in Nevada, the poker industry has never focused much energy on pursuing legalized online poker for Arizona. If California legalized the games, there would be a better chance of seeing legislation in Arizona, but neither is likely as 2018 gets underway.

Question:  Are there live poker rooms at Native American casinos?

Answer:  Yes. Many casinos have notable poker rooms, some that offer big tournament series like the annual Arizona State Poker Championships. Players travel from many neighboring states to play.

Question:  Have Arizona online players ever been harassed by law enforcement?

Answer:  No. There are no recorded incidents of online poker players being singled out by any state officials for playing online poker or any type of internet gambling. Players are generally safe from this type of prosecution in the United States, as evidenced by the lack of any player charges on Black Friday.

Answer:  Current Native American gambling compacts do not expressly permit online gambling sites, so compacts would have to be renegotiated with the state in order to pursue online gambling. There would have to be a concerted effort on the part of tribal leaders to lobby the state for this change, and most Native American tribes across America have been hesitant to transition any of their gambling opportunities to the online sphere thus far.