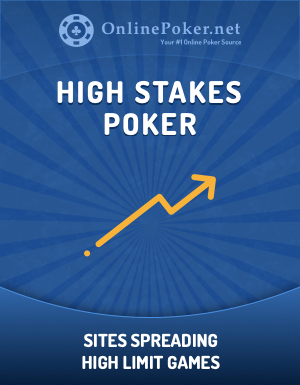 High stakes online poker is one of the things that fascinates many people about the game. And high stakes games took on new meaning during the poker boom. When poker popularity was at its peak and millions of players were competing on sites from around the world, there were tables on several poker sites that attracted the players with the most money. It was not uncommon back in the day to see $100/$200 No Limit Hold’em tables online at PokerStars or Full Tilt Poker at various times of the day or night, and the games sometimes bumped up to $500/$1000.

(Ignition Poker and BetOnline Poker are not known for high stakes play, but do have intermediate tournaments and a full array of tables for new and established players).

During those years, mostly from 2006 to 2010, players like Tom Dwan, Phil Ivey, and Patrik Antonius were regulars at the high stakes online tables. And when they took their seats, poker fans around the world would spread the word quickly through social media or online poker forums.

The virtual rail then began, with fans gathering online to simply watch the greatest players in the game compete for money that would have been life-changing sums for most people.

Below is a list of the top 5 poker sites for high stakes action – please note, none of these sites accept US players. You can participate (if you have the bankroll to support it) or rail the games. We try to update this page often, so if you find a particular online game with a bigger pot than the one listed on our site, feel free to email us using the contact form.

Live to Online for High Stakes

At one time, the highest stakes played in the poker world took place in Bobby’s Room, a soundproofed and private room in the back of the poker area at the Bellagio in Las Vegas. Doyle Brunson, Daniel Negreanu, Phil Ivey, Jennifer Harman, and many more gathered there to play games from $100/$200 all the way up to $4000/$8000 blinds.

When some of those players flocked to online poker sites for the convenience and ease of money transfers, some of the action went online.

Full Tilt Poker was the most common place to find the high stakes poker online, as many of the members of Team Full Tilt were those high stakes players like Ivey and Harman. Antonius could log on and play from his home in Monaco, Gus Hansen from Scandinavia, and others could play from wherever they were in the world at the time. It made the high stakes games more frequent and easily watchable.

The biggest pot ever won in the world of online poker happened on November 21, 2009. Antonius was playing heads-up Pot Limit Omaha against online legend Viktor “Isildur1” Blom. The two were playing $500/$1000, Antonius with more than $1.25 million in his stack and Blom holding more than $678K.

The big hand then developed as follows:

Two days later, again on Full Tilt Poker and at the $500/$1000 PLO tables, Blom took on Ivey. And this time, Blom had the better hand from the flop onward with a full house, and Ivey committed all-in with a lesser hand. Blom collected $1,127,955 from that pot, the second largest ever played online.

When Black Friday occurred on April 15, 2011, the United States government seized the domains of PokerStars, Full Tilt, UltimateBet, and Absolute Poker. Of those four, PokerStars was the only site able to recover, as the other three failed and left all of their players without their funds. The arrangement made between PokerStars and the US Department of Justice eventually allowed the vast majority of those players to recoup their monies, but the damage was done.

Most US players – those unwilling to move to another country to play US poker online – were out of the game. A number of the high stakes players had ben involved with Full Tilt in some way and lost their bankrolls.

Some players who traveled or relocated in order to play were able to start up some relatively high stakes games on PokerStars, but none of the games replicated the action or drama that unfolded regularly during the glory days of Full Tilt.

Other high stakes players relegated themselves to live high stakes poker. Bobby’s Room was bustling again with players seeking to make their big bets with like-minded gamblers. Another high stakes room even opened just down the Las Vegas Strip at the Aria poker room. And players like Dwan and Ivey made the choice to relocate to Macau, where they played games that reportedly became the biggest in the world, complete with a few pro players and very wealthy Chinese businessmen.

Poker players in 2017 and 2018 do have high stakes games available to them online, but the biggest among them are only on PokerStars and where the dot-com site is an option.

There were some big pots in 2017, however, and Blom was in most of them at the $200/$400 PLO tables on PokerStars. Several pots worth six figures each ranked as the highest games of the year, and the biggest of them all was $213,261. Blom lost the hand to a player named BERRI SWEET online at the end of July. Even so, Blom played more than 1.3 million hands online throughout the year and managed to come out ahead with profits of more than $2.1 million.

PartyPoker and 888poker also host some fairly high stakes online poker games, but none comparable to those on PokerStars. And in the regulated US market – in New Jersey, for example – those stakes are never played online. The market must grow significantly before those games will again be seen on the internet.

Poker players and fans can check out Bodog and Bovada for some medium stakes games, and Bet365, Intertops, and several other sites offer some tables for players who want to bet more than average. Most sites will meet player requests to start games at various levels if the players’ accounts indicate they can play at those levels.

High stakes online poker may not be what it was during the poker boom, but a new era brings new possibilities for players of all bankrolls.

High Stakes Sites – Its Where The Pros Play

We all have our own priorities when it comes to choosing a poker site. Some of us want speed; some of us want action; and some of us just want pretty graphics. Variety and choice are what keeps the poker world spinning.

Since you’re reading this, I’m guessing that your priority is to rub elbows with the pros. Maybe you want to sit in at the $2/4 No Limit Holdem tables with some respectable grinders. Or maybe you’re looking to cheer on some high-stakes pros from the chatbox while you play. Perhaps you just want to beg Phil Ivey for a stake. I hear he loves that. No, really — he does. Give it a try. Whatever your poker pro interaction fantasy, you can now play it out in real life. Thank you, internet! Below you will find a list of the best online poker sites sponsoring the highest number of professional players.

What, you don’t believe me? Of course the pros play poker online! You can’t rightfully call yourself a poker pro these days without playing at least a little online. Where there’s money, and poker sites with fish and lots of it, there are pros. It’s that simple.
A lot of people figure that real pros don’t need the internet. A pro ain’t a pro unless he’s sitting in a faux-velvet chair surrounded by tourists in Vegas. You’ve got to be stacking chips in elaborate patterns on the felt; taming the casino’s harsh light with a pair of Oakleys; screaming “ALL IN!” as an ace falls on the flop. That’s the life of a real pro! Right? In bad movies from the ’50s, sure. Or in the weathered caverns of your great-grandpa’s imagination.
Poker pros play on the internet daily. That’s how it is. So many pros play online, that poker rooms sponsor entire teams of them. You know how Nike sponsors golfers, or Adidas sponsors tennis players, or Louisville sponsors baseball players? Poker rooms sponsor pro players just the same.

Which Sites Have the Most Pro Poker Players?

Pretty much every legit poker site out there has a ‘team’ of pros on the roster. Having pros on the payroll is a huge draw, and a great marketing tool. So as a rule of thumb, the bigger the site, the bigger the team. Given this, it’s no surprise that Pokerstars has one of the biggest teams around. And by virtue of its being such a huge site, even pros who aren’t on team Pokerstars play there anyway. That’s simply because there’s so much action all the time.
Pokerstars doesn’t have a monopoly on internet pros, though. Sites like BetOnline, 888, Lock Poker, Bovada, and Party Poker all have very respectable pro-player lineups. If you want to know exactly which pros play where, here’s a list of sites with the most pro poker players.

Two is sweet, but three’s a crowd. Bovada took this cliche to heart when selecting its pro team.

Party Poker’s team is an eclectic mix of internet grinders, TV poker hosts, and sports personalities (including a Formula 1 driver!)